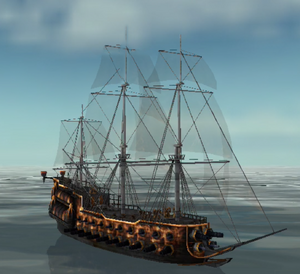 Base stats are not affected by Workshop upgrades neither Officer's skills.

Black Skull was a limited edition warship added on Season 2 of the game. With black hull and sails, featuring fire effects, the ship has a unique ability to become invisible for 10 seconds, with a longer recharge time compared to submarines. It also has the special power of Main Gun damage +200%. During game play, it's sails cannot be seen.

Despite it's great power, firing isn't very accurate and sometimes is hard to actually hit your target. Also, despite the lack of missiles and aircraft, it's torpedos and secondary weapons make this unique ship one devastating warship, good to maintain till around Episode 30 and effect during Time Attack and Boss Attack.